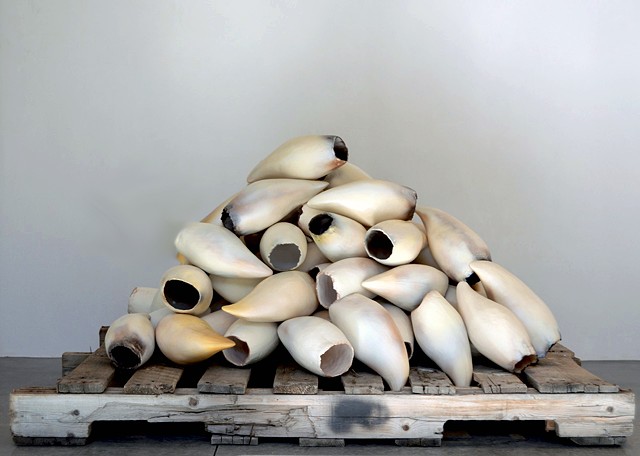 BREACH #2
Ceramics on Pallet
next >

Can a culture sustain itself when it no longer has access to the environment that fashions that culture?

Due to nation to nation agreements with the United States government as well as New York State, topics of sovereignty, imposed law and environmental issues impacting our nation, The Shinnecock Nation of what is now referred to as Long Island, NY, has and continues to struggle with access to the material of the whales as they wash ashore having been often struck by the shipping boats that pass our waters. As indigenous people in a nation to nation agreement with the United States Government we try our best to work with, advise and maintain our rights to such access and the impact of these current states as marine mammals are protected under federal law.

Through the work of BREACH and by having the opportunity to travel to and connect with other indigenous water communities throughout the world, I have been able to research and learn about our common struggles and unique narratives as they pertain to "access" and "understanding". One example being the struggles many communities face regarding the regulation and discrepancy of the ivory industry as it pertains to indigenous patrimony and practice. Communities in portions of Africa are collecting heaps of Elephant Ivory taking them to a common location and setting them afire to burn as a response to poaching and an increase of the Elephant into aspects of "extinction".

In 2014, Prince William had wanted the monarchy to also make a stance and rid the entire royal collection of their ivory as his mother Princess Diana was so active in this regard during her lifetime as it pertained to the Elephant Ivory "industry". This has yet to happen, however at or around the same time in 2014, Paris did a call-to-action act of collecting ivory on a blue tarp in a city courtyard and crushing the pile as a response. And yet, small coastal indigenous water communities that rely on our symbiotic relationship to our environment are constantly struggling to maintain our ways of life and connection to place and being.

We are placed within a lumped narrative that simply is not the same and often does not work. The indigenous youth from communities that still practice subsistence harvesting are often harassed and threatened while the suicide rates within our indigenous communities remain at the highest. These practices have everything to do with life and care and understanding. They are a way to maintain being of place and our responsibility as caretakers to that place. The works that form the BREACH: Logbooks and "BREACH #2" are also a simple visual response to a larger call to questioning, acknowledgement and potential understanding of ways of action that does not negate our individual responsibility.

The majority of whales killed per year (over 60%) are struck by shipping boats. And so while organizations such as Green Peace, PETA, and Sea Shepard fight against traditional subsistence harvesting, how many of these individuals carry cell phones, source their clothing and materials locally or are in fact a part of our mass ocean transit system of import/export and therefore the killing of whales?

BREACH #2 is an offering and account of one whale. About 48-60 teeth or the representation of the lower jaw of one sperm whale shipped and ready on a pallet for what ever may come next.

(Featured in the exhibition, "Without A Theme" at the Mashantuckett Pequot Museum, March 31 - November 2, 2017)