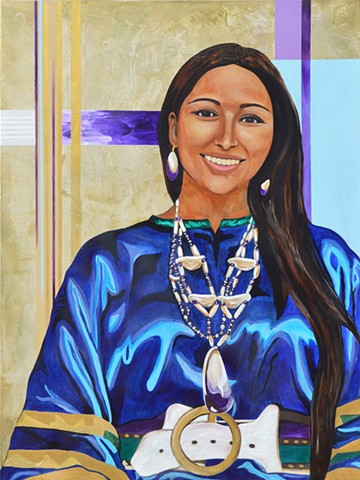 A commission by Oxford University, Diversifying Portraiture and for the permanent collection of the University of Oxford.

"Kelsey Leonard currently represents the Shinnecock Indian Nation as the Tribal Co-Lead on the Mid-Atlantic Regional Planning Body of the U.S. National Ocean Council. This planning body consisting of tribal, federal, and state entities is charged with guiding the protection, maintenance, and restoration of America's oceans and coasts. As a Shinnecock citizen and environmental leader, Kelsey strives to be a strong advocate for the protection of Indigenous waters through enhanced interjurisdictional coordination and meaningful consultation. She has been instrumental in protecting the interests of Tribes with the development of the Mid-Atlantic Ocean Action Plan and building a sustainable ocean future by valuing Indigenous traditional ecological knowledge. This unprecedented partnership with Tribal Nations for regional ocean planning is a testament to tribal sovereignty but also an important step towards ensuring federal trust responsibilities.

Kelsey is the first Native American woman to earn a degree from the University of Oxford. In 2012, she received a MSc in Water Science, Policy and Management from St. Cross College, one of the thirty-eight colleges of the University of Oxford. Her master's thesis, “Water Quality For Native Nations: Achieving A Trust Responsibility”, discusses water quality regulation and how water resources on tribal land often go unprotected. Currently, she is a Ph.D. Candidate in Comparative Public Policy in the Department of Political Science at McMaster University where she focuses on Indigenous water security and its climatic, territorial, and governance underpinnings. She is McMaster University’s Philomathia Trillium Scholar in Water Policy and is a Research Assistant for the Water Economics, Policy and Governance Network (WEPGN). Kelsey has previously worked for the National Congress of American Indians (NCAI) as a legislative associate on tribal climate change adaptation. She holds an A.B. in Sociology and Anthropology from Harvard University and a J.D. from Duquesne University. Kelsey is an enrolled citizen of the Shinnecock Indian Nation." -NAAEE: 30 Under 3