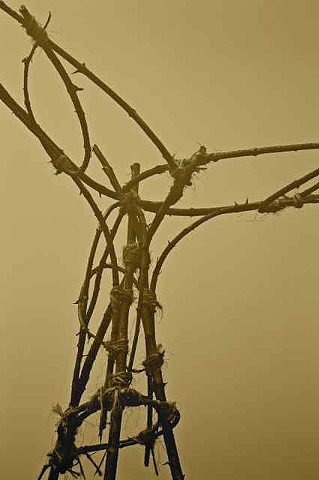 archetype noun a very typical example of a certain person or thing: the book is a perfect archetype of the genre. • an original that has been imitated: the archetype of faith is Abraham. • a recurrent symbol or motif in literature, art, or mythology: mythological archetypes of good and evil. • Psychoanalysis (in Jungian psychology) a primitive mental image inherited from the earliest human ancestors, and supposed to be present in the collective unconscious.

Description: Photo Documentation of "Archetype" an ephemeral sculpture created as an artist in resident as a part of the first "The Path We Share" residency at the Deanery Project in Ship Harbor, Nova Scotia.

This two day residency was hosted by The Deanery Project, a non-profit cooperative focused on the environment, youth and community, natural building, and the arts. The material landscape of the wooded area afforded a creative switch in practice to combine the environmental techniques and care of harvesting saplings for new and healthy forest growth. The saplings then became the accessible material and were used as coils to shape the form of a whale tail, intentionally built with an architectural framework that afforded open space. While combining the essence of a breaching tail as it passes the shore line without breaking the sight line of those standing along the shore, the work was set afloat.

When our path aligns with our waterways, it is hard to bare witness to the marks left in its movement. Although we share the path of the whale it is hard to see that path as shared territory as they leave no marks, with the exception of the occasional breach. Creating an ephemeral work, a work that holds no permanence beyond its own natural decay, acts as a brief marker in the flow of this collaborative and pertinent engagement. The photographic image acts as documentation of this moment.